Among the cellular determinants of neurodegenerative processes observed in all neurodegenerative diseases, mitochondrial dysfunction, endoplasmic reticulum (ER) stress and alteration of the ER-mitochondria communication appeared as common tracks largely sustaining the maintenance of toxic events. Indeed, interactions between ER and mitochondria are altered in all neurodegenerative pathologies and numerous genetic diseases. The question of the role of the highly functionalized domains of interaction between ER and mitochondria, known as MAMs, is currently a hot topic. MAM are stabilized by proteic bridges and sequester numerous proteic assemblies, where focused Ca2+ exchanges are driven by IP3 receptors on ER and VDAC1/MCU complexes on mitochondrial membranes. In Alzheimer's disease (AD), for instance, presenilins are expressed in MAMs and Aβ toxicity affects ER–mitochondria contacts. The altered microtubule associated protein Tau has an impact on the ER stress and UPR response that seems dependent of the mutation and/or the oligomer status.

We have previously shown that agonists activating the sigma-1 receptor (S1R), a protein highly concentrated in MAMs, resulted in an effective neuroprotection in animal models of AD or amyotrophic lateral sclerosis (ALS). Based on expertise in neuropharmacology, molecular genetics and cellular biology, our team develops a global project targeting these cellular determinants of neurodegeneration with a particular focus on S1R as: (1) a prototypic chaperone enabling functional restoration of ER-mitochondria communication and (2) a target platform for the development of innovative candidate drugs, in the tracks of Blarcamesine or Pridopidine, developed in AD, Huntington's disease and ALS.

Our team strategy, summarized in the following scheme, is developed in 4 complementary lines. 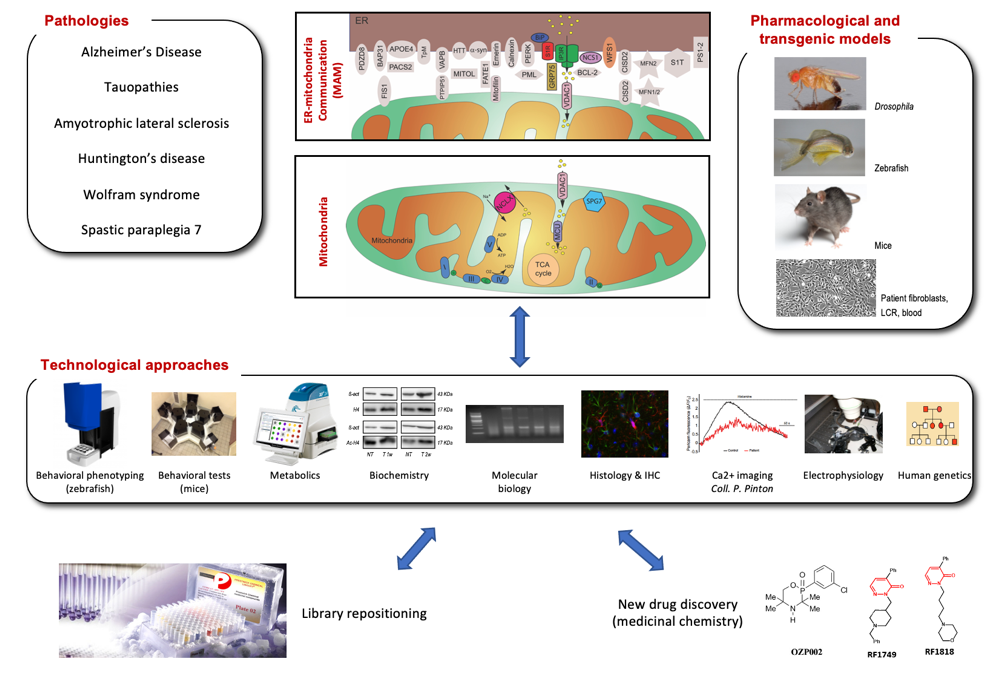