Alzheimer's disease (AD) is a progressive neurodegenerative process induced by accumulation of toxic amyloid-β peptides (Aβ) in the brain. Clinical symptoms include alteration of short-term and recognition memories and executive functions, evolving to a progressive loss of cognitive abilities and autonomy.

The first research axis of the team is to define new neuroprotective or disease-modifying therapeutic strategies, effective in vivo. We are working on new pharmacological targets which activation strengthens the activity of endogenous neuroprotection systems and decrease AD-related toxicity. Our historic target is the sigma-1 receptor, an endoplasmic reticulum-resident chaperone acting as sensor/modulator of cellular responses. We validated in vivo the neuroprotective activity of selective sigma-1 receptor agonists in AD. We analyzed its mechanisms of action and the potential of sigma-1 agonists as co-therapy agents. We also identified as a potential target, the phospholipid-transfer protein (PLTP). Our data showed that PLTP deficiency increased vulnerability to AD and we identified new pharmacological approaches to stimulate PLTP activity in several AD models. Considering the major role played by the corticotrope axis (stress axis) in AD etiology, we also target glucocorticoid receptors by using selective modulators. We examine the role of the trophic factor BDNF and particularly its low affinity receptor p75 on toxicity progression.

The neurodegenerative processes evolve on the specific history of each individual and the risk to develop AD is linked to a combination of genetic and environmental determinants. The second research axis of the team is to characterize the role of chronic stress, oxidative stress, and chronic exposure to low doses of pesticides in AD etiology and the formation of toxic oligomers.

Our projects rely on chronic AD models (transgenic mouse lines) and on an acute model, the Aβ25-35 model. We have particularly contributed to the development and characterization of this model, induced by cerebral injection of an oligomeric solution of an amyloid peptide fragment (Aβ25-35) in rodents. 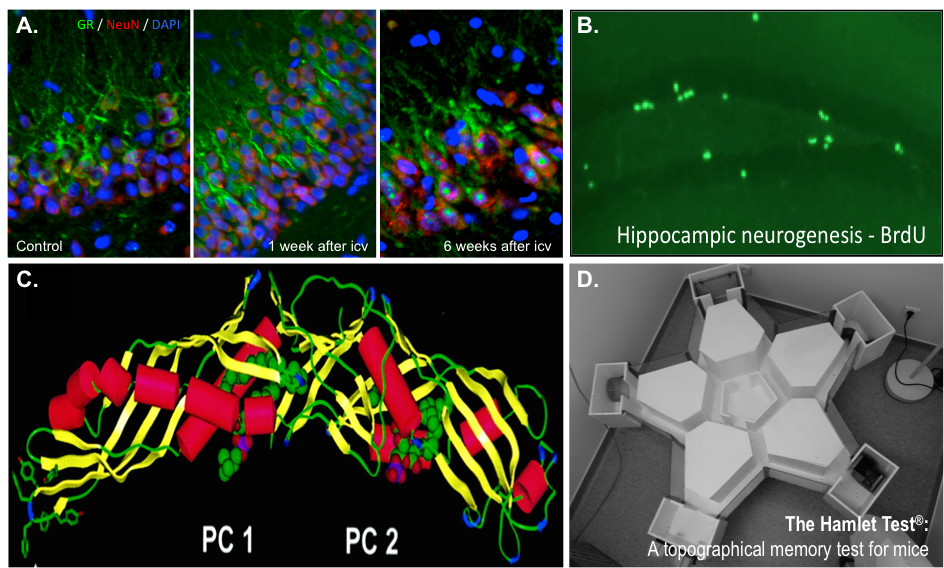 A: Hippocampic localization of glucocorticoid receptors (GR) after the intracerebroventricular (icv) injection of Aβ25-35 in adult male rat

D: The Hamlet test - A topographical memory test for mice